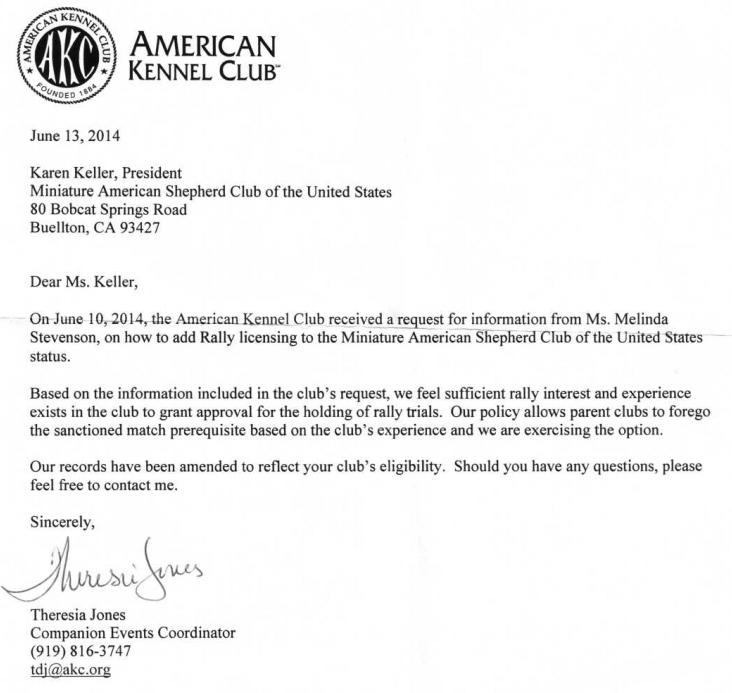 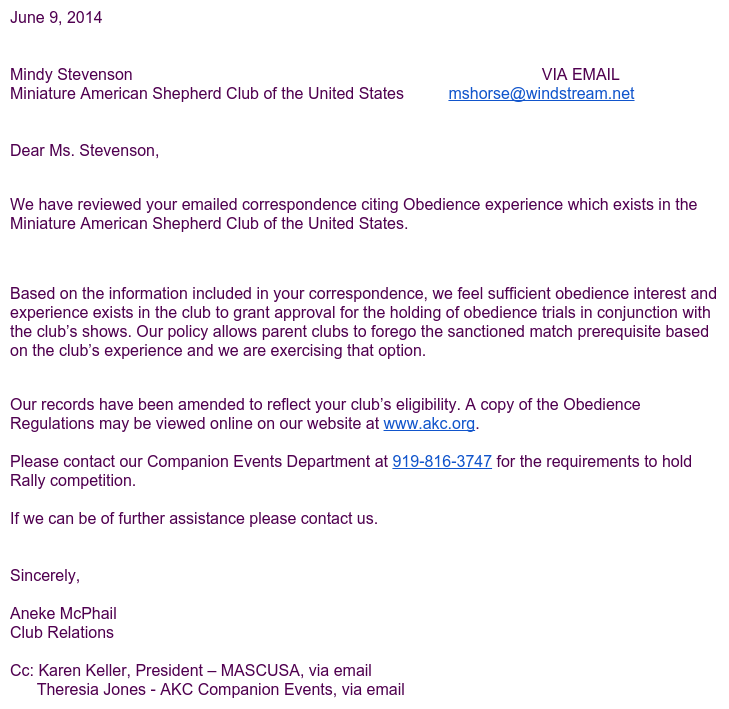 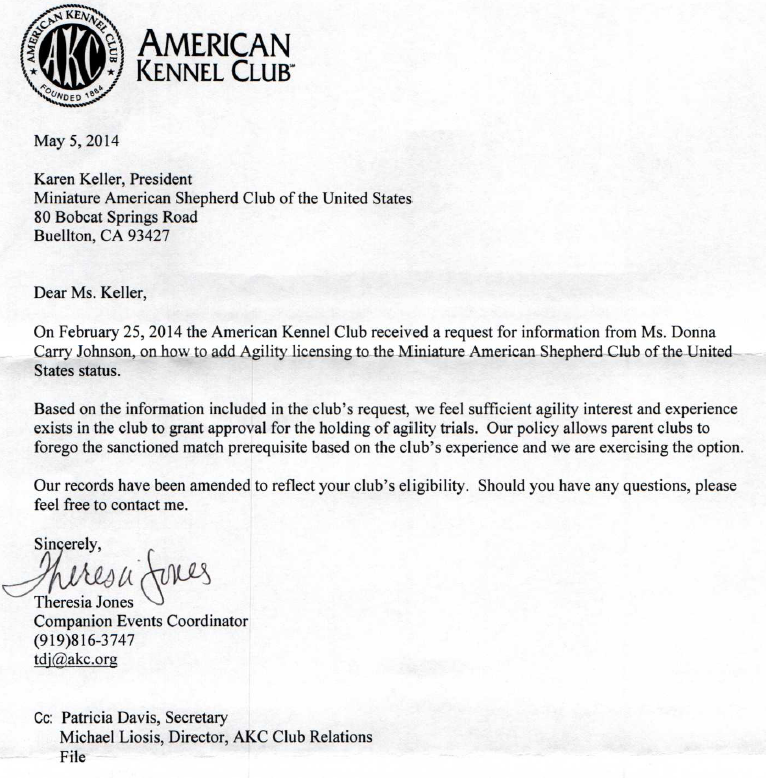 The deadline to convert an Australian Shepherd to a Miniature American Shepherd has been extended from May 2014 to December 31, 2014. 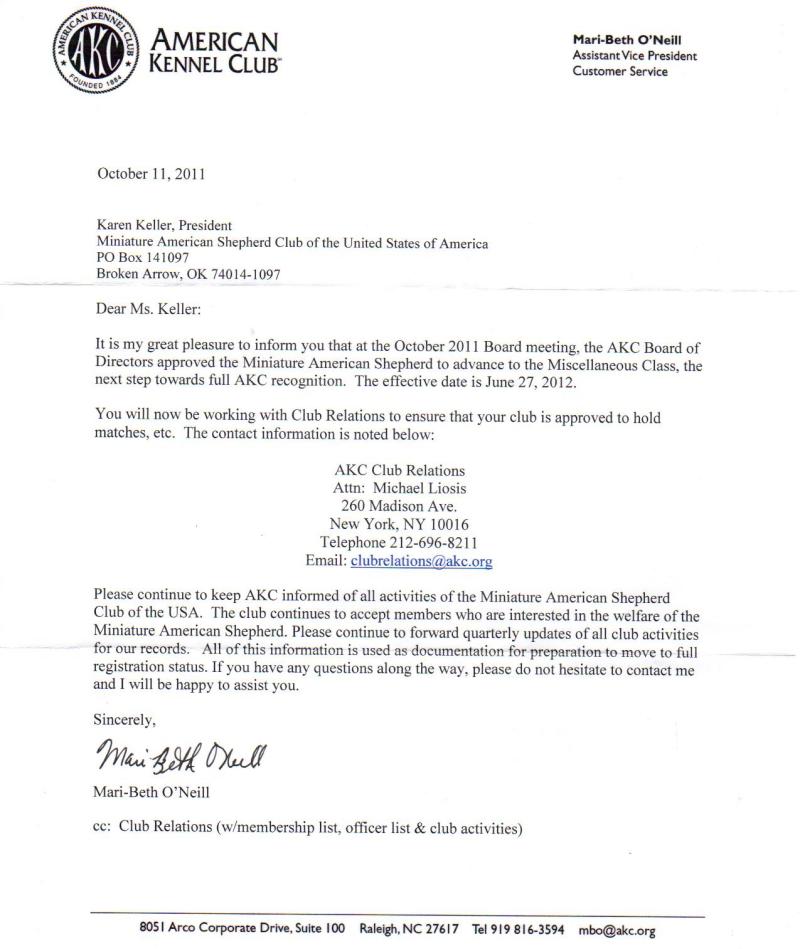 The minutes from our last meeting with AKC and USASA on July 7, 2011 are listed below for our members to read. Please note that an earlier draft of the minutes was mistakenly posted. The final approved minutes, now appear below. Changes and corrections from the earlier draft are noted in this set of minutes. Within these meeting minutes from our meeting on July 7th, you will read the agreements that ALL Entities have negotiated and agreed upon.

We are very pleased with the progress that has been made for the future of our dogs.

Attendees: Mari-Beth O'Neill, Stevens Parr, Mindy Stevenson (registrar) and the Board of MASCUSA

July 1, 2011: 1st submission for FSS/AKC registration was due into the NAMASCUSA registry in order to vet pedigrees before sending them to the FSS department for process. (FSS/AKC did not have a process fee for this batch in order to get enrolled into the FSS. NAMASCUSA charged $5.00 per process + pedigree research fees as necessary)

July 31, 2011: 2nd submission for FSS/AKC enrollment is post mark due into the NAMASCUSA registry in order to vet pedigrees before sending them to the FSS department for process. (FSS/AKC did not have a process fee for this batch in order to get enrolled into the FSS. NAMASCUSA charged $5.00 per process + pedigree research fees)

Every Friday, the NAMASCUSA office will send batches of vetted enrollment applications to the FSS department for process.

Any enrollment application submitted to NAMASCUSA after the post mark date of July 31st, will have an FSS/AKC enrollment fee of $15.00 per process. NAMASCUSA needs to figure out what fee it will charge for the service of vetting dogs before they may be accepted by the FSS department.

Any dog wishing to enroll straight into the FSS/AKC may do so as long as it has a certified NAMASCUSA pedigree. The fee to enroll your dog right into FSS/AKC is $35.00 per dog.

Role of the NAMASCUSA registry office:

All resulting offspring are eligible for full recognition in AKC as a Miniature American Shepherd until May 9, 2014. You may do so by filing out the appropriate enrollment application and submitting it with the individual puppy application or with a copy of the NAMASCUSA registration as a result of that cross.

On May 10, 2014, any cross that produces offspring with an AKC and/or ASCA Australian Shepherd within the first three generation may enroll into the FSS, but will not be eligible for full recognition. It may participate in a breeding program, it may participate in performance events as well as companion events. Once offspring is bred three generations clear of AKC and/or ASCA Australian Shepherds, it will be eligible for full recognition status. The MASCUSA stud books shall stay open. A program will be designed to allow for an open stud book for Miniature American Shepherds.

For now, we will reference this program as the tiered enrollment/registration program.

Proud To Be An American! 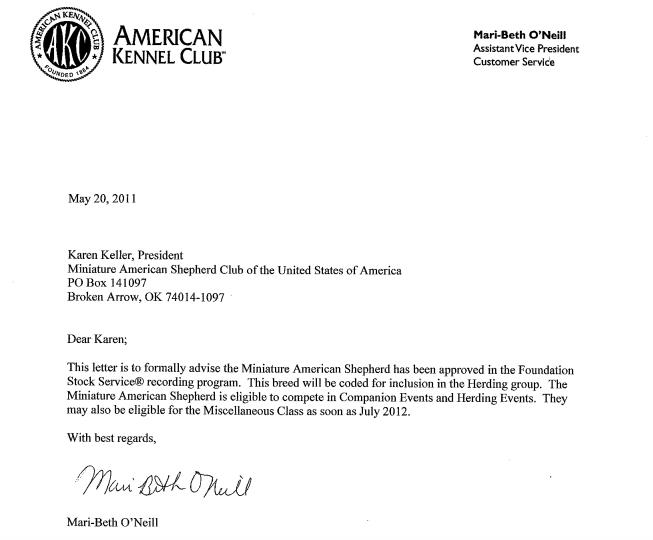 It is with great pleasure that we inform our respective memberships that the AKC Board of Directors, at its May meeting, approved the creation of the Miniature American Shepherd and designated the Miniature American Shepherd Club of the USA (MASCUSA) to be the parent club for this breed. The official notification is reproduced below in its entirety.

This announcement is the culmination of years of hard work by AKC staff, in particular Mari-Beth O'Neill, the Boards of USASA and NAMASCUSA, and special committees appointed to assist in the effort. No less important to the process were the USASA and NAMASCUSA members who paid such close attention to developments along the way and who ultimately voted overwhelmingly to approve this outcome.

Following is the Official Letter of Notification from AKC:

Staff would like to thank everyone who has worked towards this positive conclusion. Staff will be working with both organizations to develop a system to report the dogs that are voluntarily re-homed to establish the new breed in the AKC Foundation Stock Service®.

MASCUSA Vote for Entry Into AKC

To: The Membership of NAMASCUSA

After researching for almost 4 years and giving the membership the decision to decide the future of this club, the official results from the two notaries that certified the results of the NAMASCUSA membership vote are given below.

The name of this new breed is the Miniature American Shepherd. The board of NAMASCUSA will be sending another letter to the membership this next week and will be inviting you to participate in our future.

Votes for the new breed name 349

Survey for the purpose of selecting name finalists to be voted on.

The USASA vote is in, below you will find Sharon Fontanini's message to the USASA membership regarding the results of their recent vote.

As I take office it is my great privilege and pleasure to report that 84% of the members who voted have approved the USASA Proposal for Breed Division and New Breed Creation.

Attorney Genevieve Birren was asked to count the votes since she has been handling USASA balloting for some years now, including Nationals Judges Elections and the Agility Jump Height Minimum Ballot. She reported the following tabulation:

Secretary Linda Grant reports that 881 members were eligible to vote.

I would just like to add that from December of 2008 when the work towards this proposal began, to the present, the USASA Board has communicated consistently and thoroughly to you, using the Newsletter, Special Bulletins, Board Meeting Minutes, the USASA website, FaceBook, and other means. It is clear from the overwhelming support for this proposal that this communications effort was successful. I want to thank all of you for taking the time to follow on this complicated issue, which is so important to us all.

Next Steps for the Proposal

This vote of the USASA members has made it a virtual certainty that the MAS will now be a new AKC breed and the controversies surrounding this breed will now begin to end.

Going forward, I have asked Vice President Stevens Parr to follow on the work he began by continuing to represent the club on this project.

Looking Forward for the Club

This is a historic and exciting time for the club. We will be active in the creation of a new breed. Our Nationals will be moving indoors at the new Purina Event Center, building on a relationship with Purina that has been very good for the club. Overcoming many obstacles, Sharon Parr and Paula McDermid have brought the new website project close to completion, so the club will soon have a brand new and improved presence on the internet. Our member club program has taken root and should expand and mature. Our many contributions to the improved health and genetics of the breed continue. And there is much, much more. I am gratified and honored that you have selected me as President during a time that is so important to the club and the breed.

Below is the United States Australian Shepherd Association (USASA) announcement of the AKC Board's approval of its "Proposal for Breed Division and New Breed." The complete text of the proposal is also provided. Both documents were reviewed by the NAMASCUSA Board, its AKC Committee, and AKC staff to confirm accuracy and agreement on all sides.

If you approve, NAMASCUSA Members, your club will be the parent club taking the new breed in to AKC!

Last summer USASA and AKC approached our Board about joining in talks leading to possible AKC recognition of MAS as a breed. USASA was there because it is the parent club for the Australian Shepherd. AKC does not make decisions directly concerning a breed without parent club involvement, so USASA was critical to the process. Indeed, without USASA, this initiative could not have started.

Many of you will remember that USASA had pre-conditions for taking part. They bear repeating:

The Board was not happy with these pre-conditions. Yet it was clear that if these pre-conditions were not accepted, NAMASCUSA would have no influence on AKC recognition of MAS and, furthermore, another organization or group would be invited to take its place.

This was communicated to the NAMASCUSA membership in a lengthy series of "Q & A's" prepared jointly by this Board, USASA, and AKC staff. Last September, you voted 218 - 108 to allow the talks to go forward.

For a long time, the focus of the talks was how to expedite passage of MAS through AKC's Foundation Stock Service (FSS) the normal home for "developing breeds" before they achieve recognition. Going this route potentially meant many of our dogs would have to be bred and registered for three generations within FSS before recognition would be possible! That was unacceptable. The breakthrough came this summer when the USASA Stud Book Committee reported its finding that as much as 15% of the Australian Shepherd stud book consisted of MAS. At the same time it became evident that in spite of being bred from different foundation dogs and according to different breed standards, MAS and Australian Shepherds had become so intertwined genetically that they clearly had to be acknowledged as belonging to the same family. This meant that USASA could apply to the AKC Board for breed division, separating MAS and Australian Shepherd into two breeds. Simultaneously, USASA could propose that NAMASCUSA registered dogs should be accepted into the new breed, thus solving the problem of the FSS three generation requirement. That is what USASA has done and the AKC Board has approved.

The proposal is not everything that NAMASCUSA could have desired, but it is history making in terms of how much it does do for MAS and the fancy. We will be on an unprecedented fast track to AKC recognition if you vote to accept this proposal! Remember, if you do not accept this proposal, then USASA and AKC will move to implement it with another organization or group, leaving NAMASCUSA without any influence in this process.

We are not including a summary of the main points of the proposal, because this is thoroughly done in the USASA announcement, plus the full text of the proposal is also available to you here. NAMASCUSA will be providing further communications to answer questions that will inevitably arise. The NAMASCUSA Board and its AKC Committee will also be regularly available to answer questions directly. There will be plenty of time for this, because the proposal must first be voted on by the USASA membership. Then, if that vote is affirmative, it goes back to the AKC Board for final review and authorization. Only after that will you be voting. We look forward to a continuing dialogue with you as we go forward.

On behalf of the NAMASCUSA Board of Directors and NAMASCUSA AKC Committee,